I've been very disheartened with the internet recently.  Between Twitter's Nazis and Facebook's data collection, ad policies and democracy manipulation, I've begun to feel like the internet that I loved was gone.  And as more people almost exclusively spend time using services that are run by corporate entities, these services are systematically killing off third party access to their content in order to lock you into an experience that they control.

While there are the easy targets of Facebook and Twitter it goes so much deeper.  Slack has come to control chat, YouTube holds almost the entirety of user-generated video and people's entire photo collections are handed over to Instagram.  And even though my personal email isn't hosted with Google, "Google has most of my email because it has all of yours".

The internet used to be the great equalizer.  It didn't matter what you looked like, how much money you had, or what circles you were a part of.  The nerds and weirdos ran things, and it felt like home.  Now people fabricate their entire lives to impress people on Instagram every day and the business people, celebrities and "pretty people" control things.

So instead of just watching the real internet that I cared about fade away, I put my time and money where my mouth is and picked one thing that meant the most to me.  A piece of the internet that has been there every day for me since the day that I first logged on.  And that's Internet Relay Chat.  So let me quickly talk about IRC.

IRC was first created in 1988.  It's an internet standard, just like FTP, the web or SMTP, IMAP and POP3 is with email.  Anybody can run an IRC server and connect to each other to form IRC Networks.  There have been networks of IRC servers that have been around longer than the web has.  But in general, regular people have left IRC.  And that's no surprise.  When IRC was at its peak the internet was less mainstream.  As the internet matured the corporately controlled destinations popped up and one by one people spent less time on IRC and went to where not only their online friends would be, but where they could find their real-life friends as well. Freenode, an IRC network focused on software developers and open source, is the single exception here, where it's actually grown with the explosion of open source software.  But even in this use case, Slack has become the new standard when it comes to new real-time chat communities popping up online. 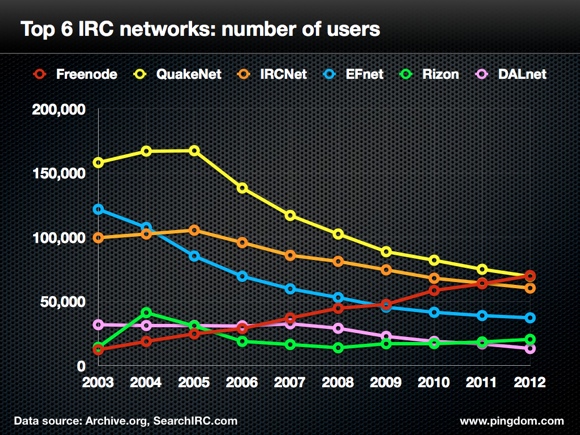 I've been involved with an IRC channel (chat room) called #TheCabin on EFnet since 1995.  Some of my closest friends I met there, and I still talk to them there daily.  Marriages have taken place because of #TheCabin,  I've traveled to meet people I knew from #TheCabin, and people have traveled to meet me.

And you know what has changed about IRC all this time?  Absolutely nothing.  You can still log in with any IRC client that you'd like and start chatting with people from all over the world without giving up your name or email address, viewing ads, being profiled, or losing a sense of anonymity.  No profiles, no data leaks.  Just the internet like it used to be.

So if the "modern internet" kind of sucks and #TheCabin on IRC is great, but people still aren't using it, what could I possibly do about it? Try and make #TheCabin more like the other services. This means looking at modern internet products and molding #TheCabin into something that resembles it.

I asked myself "What if I were to package, market and treat #TheCabin as if it were a modern product?" And after a little convincing of my friends in #TheCabin, I put together a plan to put a new coat of paint on a very old cabin.

This starts with all the things any other product would have, beginning with an actual product marketing web page.  And what do you find when you get somebody to this page?  The same thing you'd find with any other product's home page:  Next to all of the bullet points of why you should try it you'll find the links to the iOS, Android and web apps.

And how do you get people to this page in the first place?  You make an ad and you run it where people are.  Ours talks about #TheCabin in comparison with other internet properties and the gratification you get when you have a mix of real friendships, anonymity and not having to play the selfies/fabricated life/followers game.

{=html} <iframe src="//www.youtube.com/embed/2lX097My4FQ?wmode=opaque&amp;enablejsapi=1" height="480" width="854" scrolling="no" frameborder="0" allowfullscreen> {=html} </iframe> So while anybody can join #TheCabin with any IRC client that's not what the modern internet user expects.  A certain amount of convenience is required to get people in the door these days, so #TheCabin has a native iOS, Android and web app that make it super simple to join us on IRC.  No servers, no learning about clients, channels, and protocols.  You just go to the App Stores or click on a link like you would with anything else and you'll end up in #TheCabin not even realizing you're taking part in an open service that pre-dates the world wide web.

{=html} </div> But I'm not telling you any of this to get you to visit us in #TheCabin.  If you want to, that's awesome, we'd be happy to have you.  You might hate it.  We might hate you.  That's the fun of it. Though if you're somebody that thinks it might be inappropriate to be hanging out there (close connections and family members of existing cabiners, people who only know existing cabiners professionally, etc), then it's probably not appropriate for you to be hanging out there. But the reason I'm telling you about #TheCabin and our journey is because there's a whole internet out there that isn't controlled by corporate interests, that isn't making you trade privacy for services and isn't trying to sell you anything.  So please, find a piece of that internet that works for you and hold onto it.

I know there's a limit.  I can't seriously suggest we all start hanging out on Usenet, running our own YouTube video hosting service replacment or trying to find a new Gopher server that we'll really love.  But do you use a non-Gmail email provider that you pay for and think provides a quality service?  Tell a friend.  Are you starting a community that requires real-time conversation?  Maybe don't default to Slack and find an open solution instead.  Want to write a blog post?  Make sure you own your content and you're not just handing things over to Medium.  Start your own website.  Don't trust others to keep your stuff safe.  Pay for services.  When you give them money they owe you something in return, while free services have to make you a lower priority.

And as for IRC, there's still a future.  There's a push to give IRC a facelift with IRCv3, something I hope gets widely adopted.  Adding features like supporting threaded messages, extended metadata, native web support, chat history, etc.  All things that people come to expect after being used to things like Slack.

And trust me, I'm not perfect.  I have a Facebook and Twitter account and I'm not looking down on anybody for what they choose to do online.  After years of hosting my own website, I now use Squarespace.  I use a ton of services both paid and not after years of learning what made sense to host myself and what made sense to pay somebody else to do.  Heck, I'm running ads for #TheCabin on the very services I'm complaining about. But I like to think I can use them without giving my life to them, but I know it's a slippery slope for all of us, so maybe I'm wrong.  One day you're using Gmail because it's free and the next thing you know there's only four email providers left in the world that are federating between each other.  You write one medium post and soon it owns all of your written content.  You rely on Facebook 100% for your internet presence and overnight they change their algorithm and hide your posts.  And before we all know it all we can do is use the Wayback Machine to remember all that we lost, and what the internet used to be.