{=html} <iframe src="https://player.vimeo.com/video/214576527?wmode=opaque&amp;api=1" width="640" height="360" frameborder="0" title="Longtail Music Promo" webkitallowfullscreen mozallowfullscreen allowfullscreen> {=html} </iframe> It's no secret I've been frustrated with music discovery for a while.  Ever since Rdio shut down I've listened to less music on mainstream services.  While I do have a Spotify account, I tend to only use it to listen to old playlists and comfort music.

Where music discovery has been successful for me, however, is with internet radio.  Having a person with deep knowledge within a certain style hand-picking tracks for me every day has proven time and time again that it's a system that works.

I built The Bat Player as the best way to listen to your favorite internet radio stations on your television. It's a client for power-users where you can add any station.  But I wanted to facilitate an experience for a wider audience that wouldn’t already have stations lined up to listen to.

There’s no lack of internet radio directories.  Many boast “thousands of stations” with no context or assistance for a perspective listener.  If you’re lucky you’ll be linked to a web site for a station to learn more, many looking like they haven’t been touched since 1998.  There had to be a better way.  So I built Longtail Music.

I focused on a specific set of stations that met a standard of quality and ultimately resulted in me directly reaching out and inviting them on board.  My goal was to create a “loosely connected network of independent stations”.  The content on these stations is really great and I’m honored to have met all of the station owners who care deeply about their slice of music online.

With stations in place the first hurdle for a potential listener is determining what station to listen to. Longtail’s feed helps here.  Feeds are how people consume content every day with bite-sized chunks scrolling by on every network.  Browsing the feed gives you easily digestible snapshots of what is taking place allowing the style, personality and content of stations to come out.  What they’re playing, events being scheduled and reactions from listeners are all analogous to what is seen every day on Facebook and should feel like home.

Instead of simply stating a certain genre is played, the actual content of the station is featured.  It’s the difference between that person you met who says “Yeah, I love music. It’s cool!” and the one who says “I only listen to early Ministry and Peter Green’s Fleetwood Mac”. You'll know what you’re going to enjoy if you get the specifics upfront.

We live in a predominately single-dominated world. But listening to that one song and forgetting about it isn’t how you discover new music. Instead you hear a new song, track it down so it can be listened to obsessively, and then dig through the artist’s catalog to see what other stuff you’ve missed out on. I want to facilitate that workflow.  That’s why every song is only a click away from being played on Spotify, the largest on-demand music service. So visit the list of songs you’ve “Liked” and add them to your playlists, dig through the back catalog, and listen on-demand again and again. Each song is a gateway to an entire artist, entire genre, or entire world of music you may not even have known about.

Click on tracks to navigate to them in Spotify, Deezer, Apple Music and more.

I hope I’ve made it clear so far that music is not a zero sum game.  There is room to have both the Spotify Discover Weekly playlist algorithm and personal curators shoveling a steady flow of musical coal into your audio consumption furnace. Because of this interoperability is a thing I’d like to continue to focus on.  That’s why on Longtail you can do things like use your Facebook or Spotify account to get a list of suggested stations.

I wanted what I call a “thin social layer”.  Real-time, live, internet radio is a shared experience and that aspect should be emphasized.  Knowing others are turning in and listening with you is a cool feeling.  “Liking” a track isn’t just a meaningless gesture to keep track of songs for yourself, it tells fellow listeners what you think, potential listeners the content that is drawing attention, and is even a datapoint for the DJ to know the feelings of the listeners.

Longtail Music's full screen player.  See in real-time other people tuning in or reacting to tracks.

And lastly, I'm not just doing this for the listeners.  Internet radio stations have been hiding in the shadows as long as I can remember, doing its best to keep the lights on, keeping up with licensing payments, hosting fees and more.  I wanted a convenient, centralized way to collect donations from listeners.  So if a station enables it you can help keep the tunes flowing by "Tipping" them and I'll make sure it gets to them.

It’s early days with Longtail Music, but I’d like to thank everyone who’ve supported the idea so far, including all the stations who have given feedback, suggestions, and encouragement. 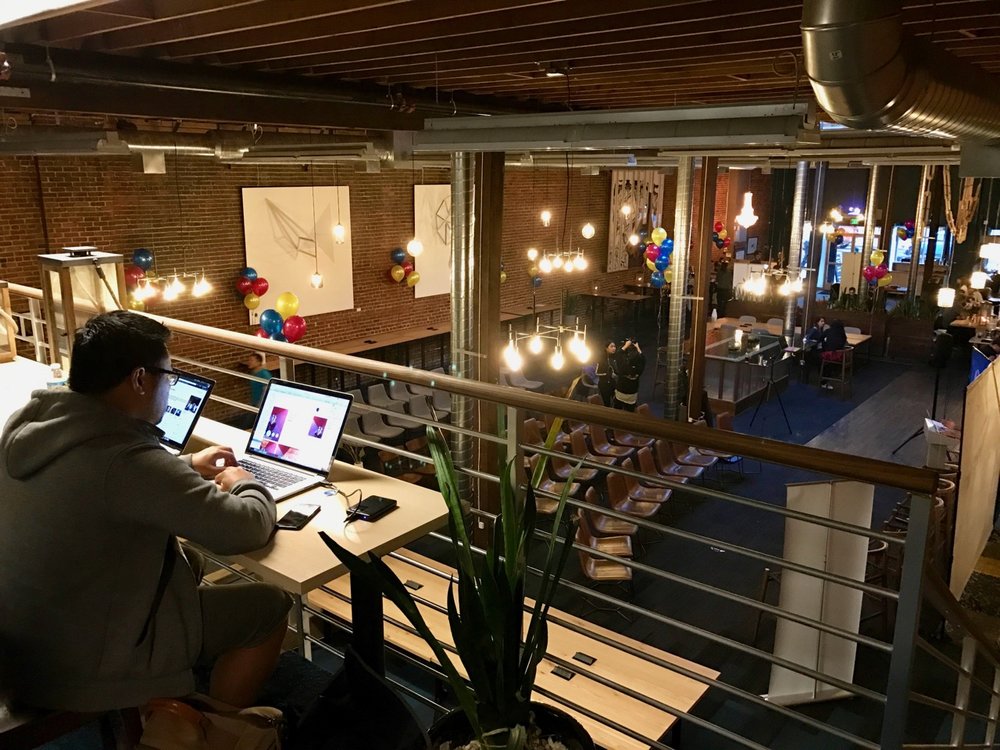 Thanks to Jay Demetillo , who came up with the overall look and feel of the site.  He was a huge help in giving structure and style to everything.  This is him and I at Covo working on Longtail.

Give Longtail Music a shot.  Maybe you'll find something you'll be really into.  Need a suggestion?  How about Lowercase Sounds.  Today is their 12th anniversary of streaming their brand of house music online.  If you missed out on the past 12 years make sure you don't miss out on all the fantastic music being shared online by people like Très and his crew in the future.

Let me know what you think.