My Thoughts and Experiences on the Pebble Smart Watch

LIke with a lot of things in life I told myself I didn't want one.  And then when it came down to it I realized I was lying to myself and I actually did.

This was the story behind the Pebble Smart Watch.  Once people started getting them delivered, and I read this review I knew I must have it.  Luckily Criagslist exists and people were selling theirs.  Watch acquired.

@franktronic asked if I could write a mini-review of my experience thus far with the little gizmo.  I figured why not.  But you should also read the awesome Five days with Pebble by Danilo Campos as he's much more eloquent than I.

I'll be going at this from the perspective of an iPhone iOS 6 user, since that's my primary device.

Out of the box I was slightly frustrated quickly as I learned of the things that it couldn't do.  "I can get my Twee...oh.  I can get my Faceboo..oh.  Well, at least I can get my SMS."  Knowing that I couldn't get my Tweets on my phone wasn't an answer I could accept. So I went ahead and Jailbroke my phone ASAP to install BTNotificationEnabler.  Success.  Now I can get the notifications I want on my Pebble.  A huge difference.  Without this hack the Pebble sadly would be useless to me.  It's just not enough to dismiss phone calls and read text messages.

The next thing I experienced was a period of learning to trust the watch.  I'm used to my phone vibrating.  Now my phone and my watch would vibrate at the same time.  I'd glance at my watch, dismiss the notification, and move on.  But a minute later my phone would vibrate again... but not the watch.  Why is that?  I had the setting enabled to remind me about missed notifications.  The iPhone had no idea I saw it on my watch and therefore was going to remind me until I look at it on my phone.  I dealt with this a couple days until I figured that Pebble was here to stay, so I turned not only repeating reminders off, but I also turned off vibrate on silent.  My watch is now telling me what's going on.  No need for my phone to duplicate that.

For controlling audio apps on iOS is works great.  I feel it to be a bit odd that you have to launch the "music app" on it.  It would be nice for it to detect that audio is playing on the device and switch to that for you.  And when audio ends for it to switch back to the watch face.  But that's a minor gripe.  I've been using it to control both Downcast for Podcast listening and Spotify.

Not that I care about its watch, time telling, functionality, but it's fine.  You can download different watch faces.  My guess as time goes by there will be some really cool ones that become available.  Right now I'm using the "Text Watch" that everyone else who owns a Pebble seems to be using where it tells the time in a "Five Twenty Two" format.

I wish it would queue up notifications.  Right now if another notification comes in before you saw the previous one you won't see the first one.  Doesn't seem like a big deal, but if you're at dinner with somebody, and trying to be polite, you may not want to check your watch every time it buzzes.  In fact a motion that looks like you're checking the time every couple minutes may actually be more insulting than pulling out your phone.  Having your phone out all the time has sadly been accepted.

As far as battery life, it's lasting about as long as I'd expect.  I think around five days'ish for me.  They're saying it should be seven, but close enough.  However, I'm experiencing an issue where the Low Battery notification comes far too late.  It's supposed to come when I have about 24hrs left, but usually it hits me when I'm around 1hr left.  Without a charger at work (you can't get an extra cable at the moment), my watch will die before I get home.  I'd prefer to get that notification in order to charge it the night before it plans on dying on me.  This seems to be a bug, and I've sent them logs.

Aside from those couple small items it's been smooth sailing.  Someone looking for me on IRC?  My watch lets me know.  Someone mentions me on Twitter?  Even if I'm half way across the office away from my phone, Pebble is letting me know.  Delivery notification for a package sent to me via Push Notification?  Now it's on my wrist.  Not to mention the regular stuff like dismissing phone calls, reading emails, and seeing text messages come in.

And it has a backlight. 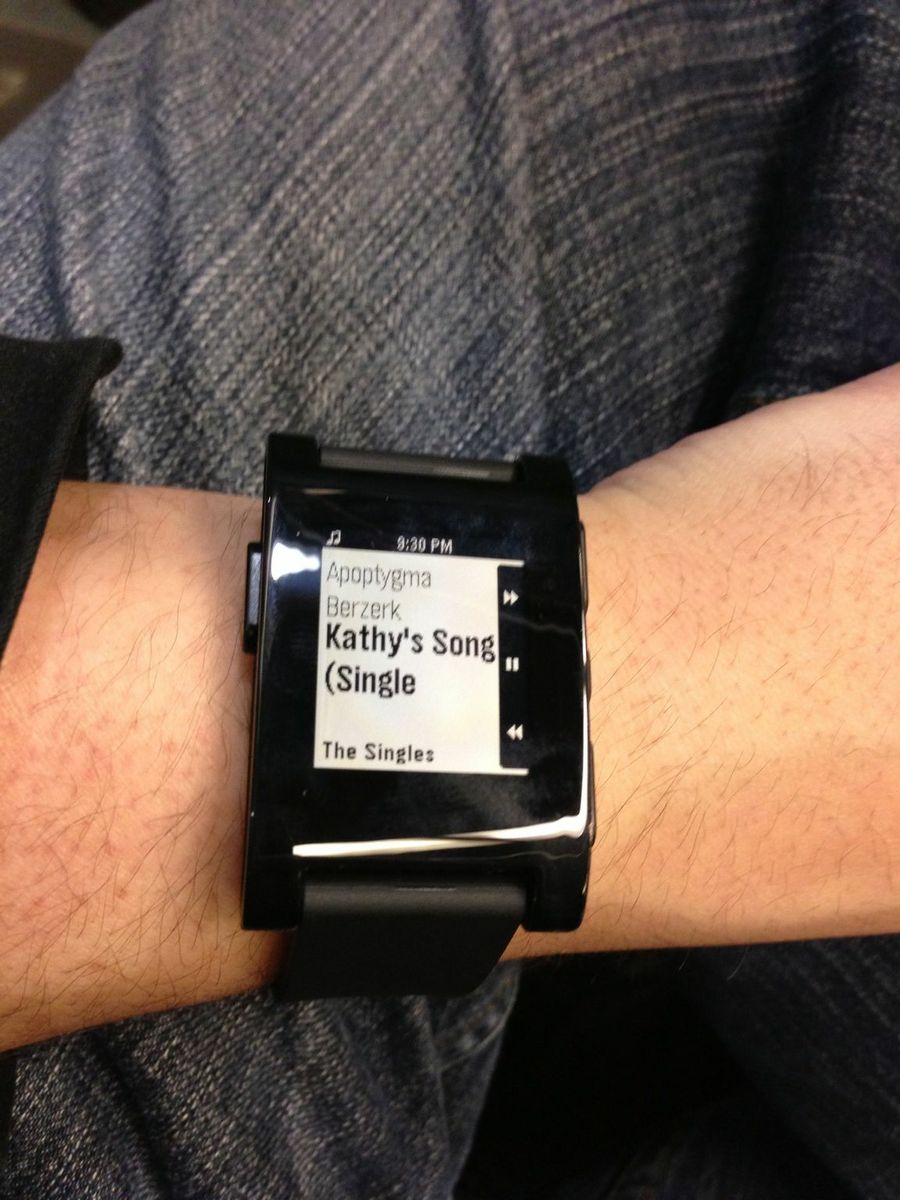 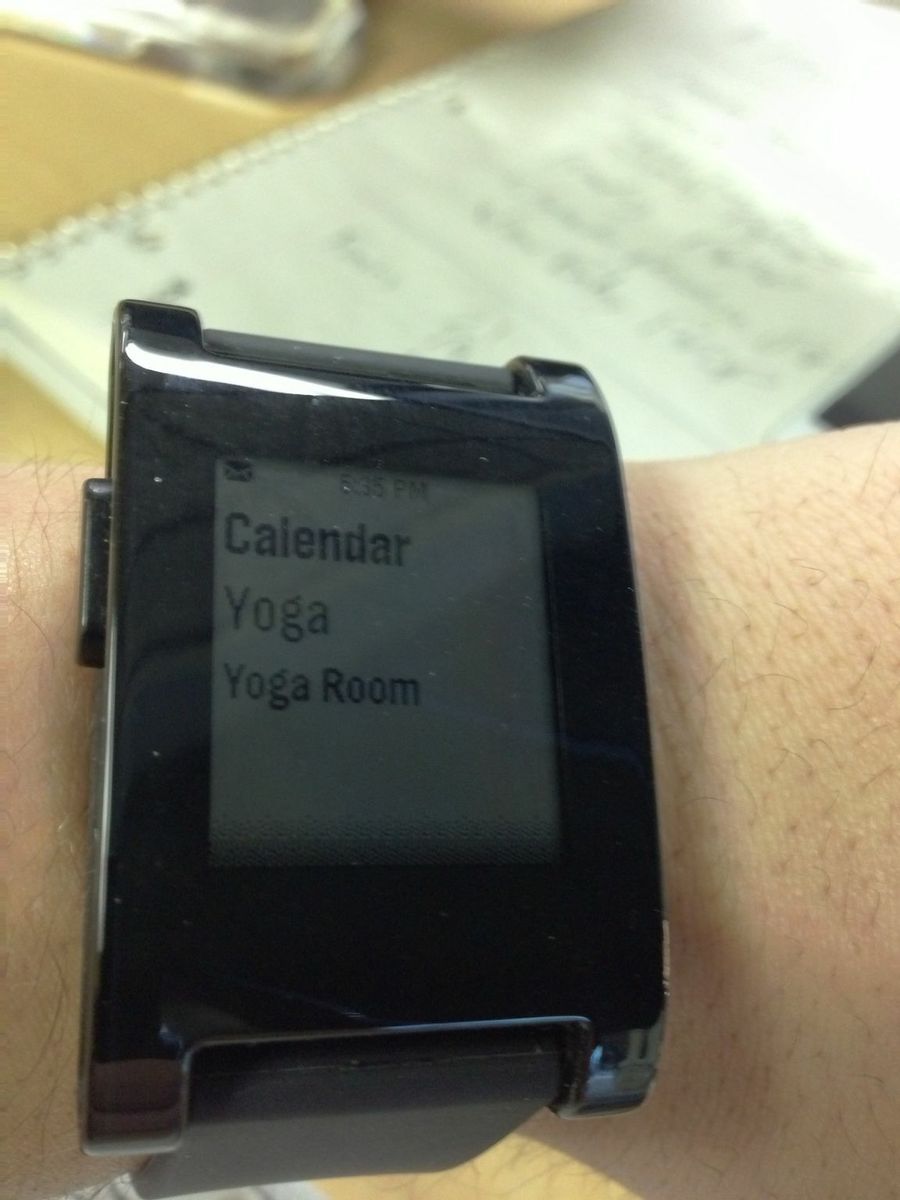