I've Been Quiet! I've Been Busy!

I haven't blogged for quite a while.  And that's not a bad thing. It's been a couple months now since I left my position at West, and I haven't said a word about it since then.  There's no real reason why except I've been super busy.  Busy with a handful of really awesome things.

I've had the chance to work on some really neat projects lately, and I'm really looking forward to continuing it.  Leaving the corporate world is certainly up on my "best things I've ever done" list, right up there with moving to Omaha, the city that's allowing me to do it.

Though the most exciting thing, hands down, is going forward with a project, lovingly dubbed Mysterious Dottie,  that has been my baby since early last year. 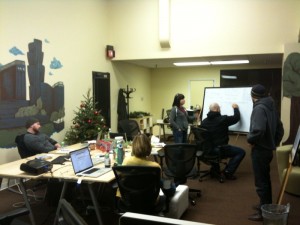 Since the early days of its development I've stayed quiet about the idea and the execution.  While developing it alone I put in a lot of time, and still was dark about it to all but a few.

Though now I've teamed up with Timothy Kephart who's offering to supercharge the project.  It's grown in scope, cost, and people involved.  I've dropped the initial development in order to start over with a team of people, in addition to me, who are building this to be an amazing product.

This is nothing short of a kick ass opportunity to see my baby come to life, though at the same time I'm extremely defensive of it.  I'm the first to attempt to stomp out scope creep, "cooks in the kitchen" syndrome, and any kind of bastardization of my product.  Even though it's no longer mine.

I've never worked with a team in development before.  Everything I've ever done has been mine from start to finish.  This is mostly because I've never really had a corporate development job where you're building products as a team under project managers.  I feel myself going back and forth from wondering "am I leading this team?" or am I "just a developer" or " I'm an asshole".  Asshole, of course, being the title of my role who gets upset when my initial vision is going in a direction that I don't see it make sense in going.  (As a joke I say they're going to turn it into a 3D gaming platform).

I'm lucky that I really respect everyone on this team.  They're all stupid smart in their own specialties and holy crap I'm excited.  It's what I've dreamed of, but at the same time I'm trying my best to adjust.  I really think this is one of the most important things I've ever had a chance to be a part of, and I'm so very proud of it.  I can't wait to show it off to the world.  I just hope everyone involved are still friends with me by the time we're done :)

Oh, and if anyone from team dottie asks... I never wrote this post.  You didn't see anything.  *wink*