Gabe's Tools of the Trade

This isn't the first time I've made a post like this.  In fact I used to make a yearly recap of all the tools, software, hardware, etc that made me productive that year.  For whatever reason I didn't this past year.  Not sure why.  Guess I was busy hanging out with you or something. Inspired by Andy Peter's Barcamp Omaha talk I thought I'd share some  non-obvious things I use to do things on a daily basis.  I like to share.  Do you?  Have a cookie.

I use ImageWell almost daily.  It's a simple graphic capture and upload tool.  You configure a couple FTP/webdav/drive locations and you can capture selections or the whole of your screen.  Or take an image file and just drop it onto the icon.   Hit "Send" and it uploads it to that location and puts the URL of the file in your clipboard to paste wherever.  In fact that's how I captured my dock that's shown above.  You can do some simple editing such as crop, watermark, some little filters as well.  It's so stupid easy that I couldn't imagine not having it.  I have mine configured for my mobileMe and Flickr accounts.

I just actually recently started using Dropbox.  It's really simple way to have a folder sync'ed with all your other machines, and even your iPhone.  For me this includes documents and code.  I really like developing on my desktop, but when I'm at a coffee shop and want to pick up where I left off with my MacBook Pro the code is sitting right there.  I'm also planning on migrating my iTunes library (the data file, not the actual music) to my Dropbox so every machine has an up to date version.  I'll let you know how that works out.

If you code on a mac, and it's not an Xcode project, TextMate is the editor to use.  At least that's what I've found.  I really love it.

As an avid IRC'er I've tried every IRC client on pretty much every platform.  Windows, OS X, *nix GUI and console, iPhone, Palm OS, BeOS, you name it.  The client I keep coming to is the free X-Chat.  It's simple and highly scriptable.  On my mac it's how I keep in touch with my IRC friends around the world on a daily basis.

If you do work on the internet you need a good FTP client.  Transmit is my favorite.  I pair it with TextMate when editing files live on a server.  Double click, edit in TextMate, save, Transmit sends the updated file back up automatically.  That's how life is supposed to work, folks.

I use this constantly as a cloud-based location for any snips of text that I ever need.  Addresses, phone numbers, code, things grabbed from web sites, anything.  I just drag and drop from Safari right into Evernote on the dock and lo and behold it's right there on my iPhone when I need it.  This is especially great when I'm going somewhere and I need an address.  I just drag it from Google to Evernote, and then open it up on on my iPhone later when I need it in the car.  It's free, but there's a paid pro version as well.  I paid for it because it's just that cool.  I didn't get it at first, but now that I do... I'm glad.

I'm a bit of a poser here.  I have Things, and I sometimes use Things.  I'm currently trying to force myself to put everything in Things and stop relying on short term memory when it comes to prioritization and execution.  I think Things will become more useful coming up here in the short term, and I'll let you know how it goes.  Personally I think the reason why I haven't been able to go 100% Things is the fact I'm forced to a Windows desktop most of the time because of my current job.  Sure, I have my iPhone.  But I find it hard reaching for my iPhone to do things when I'm already at a keyboard.  I have the iPhone and OS X Desktop versions.  They sync, and they're easy to use. 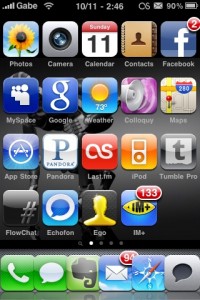 Check out my list of installed iPhone apps, Games, Used Daily, and obscure recommendations too.

Who would have thought that a Twitter client would be a "tool", but for me it is.  Often times a tool for destroying productivity, but more often than not it allows me to connect with people and get things done in a way a couple years ago I'd never be able to.  I also use the OS X version of Tweetie as my desktop client, but I don't really recommend that over anything else.  Where on the iPhone Tweetie version 2 is the champ.

It'll scrobble (post to Last.FM) a song in real-time from your iPhone.  Makes sense.  You have a device playing music that's on the internet, why shouldn't it be able to submit the song while you listen to it?  Requires jailbreak.

Stupid, but I use it a ton.  Say I was laying in bed and I wanted the song "Semiotic Love" by "Blaqk Audio" to start playing in my livingroom via the AppleTV, my bedroom via Airport Express, or any other mix of devices.  I could do that, and it would look something like this: 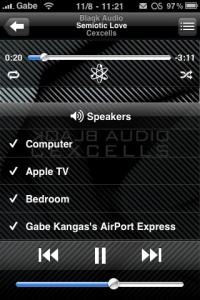 Makes your iPhone lock screen a dashboard of unread email, new text messages, your calendar, news and more.  It's a jailbreak app that takes some resources and in the past has been kind of flakey.  It works better on my 3GS than it did on my 3G.  Given its faults, I still really like it.

Gives a Growl-like popup when new email comes in.  Simple, but I really like it.  If i'm on my iPhone and a new email comes in I can know what the content of that message is without leaving what app I'm in.  This should be built in iPhone functionality, personally.

It supports push notifications for Tweets, Facebook updates and anything that can be sent to an email address.  I use it for all three.  Next time you hang out with me and notice my phone beeping and buzzing every minute or so... this is the app to blame for that.  When someone sends a tweet to @gabek I get a push notification via Boxcar.  When someone replies to a Facebook status update, I get a notification via Boxcar as well.  And I have a Boxcar email address that I have as a part of my paging notifications for work.

Due to Andy Peters' recommendation I use Freshbooks for time tracking, creating estimates, and invoicing for any client work.  Quality product and there's even an iPhone app that ties into it.  With my new venture into Life 2.0 I need some help as far as the "paperwork" goes, it's not my forte.  This product does that for me, and I thank it wholeheartedly.  I mean otherwise... a spreadsheet?  Quickbooks?  Man... I don't even want to think about it.  Don't quote me on this if some day I have to end up using Quickbooks.