NIN for the Last Time. for Real This Time. Chicago. 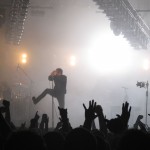 Friday morning started like any other Friday morning.  By Friday afternoon I found out that Andy Peters and I were headed to Chicago that night to see one of the last performances of our favorite band, Nine Inch Nails.

A while back Skid Vis surprised Andy and I by telling us he hooked us up with tickets to the completely sold out Nine Inch Nails show in Chicago.  However it was a "paperless ticketing" show.  Meaning you couldn't just pay for something and then get a physical ticket for admittance in the show.  The person who enters the door of the venue has to be the person who purchased the tickets.  Andy and I didn't purchase any (we tried, though).  So we just kind of assumed there was no way that we could go in.  But Friday just after lunch I received a call from the ticket broker company with details.  We are to meet the person in Chicago who purchased the tickets and go into the show with him.  We were actually going.

Some quick planning and 5:00 hit.  I got home, threw some things into a bag and off we went.

We got in around 3am, but it allowed us to be there all day Saturday.  We got some Giordanos pizza and I gave Andy a quick tour of downtown.  He'd never been to Chicago before, so I wish we would have had more time to hang around.  But there were more important items at hand.  We were going to see Nine Inch Nails for possibly the last time ever.  And we were really lucky to do so.

It was an adventure to actually meet up with the guy, "Steve", who purchased the tickets and then resold them through the broker.  Andy was on the phone talking to this guy and we were looking out for a guy on a phone looking for us.  When we finally tracked down who we believed to be our ticket guy we asked "Are you Steve" and he says "Yes", and we say "Hey, it's us!".  He says "Sorry, I'm on the phone right now."  Turns out it was the wrong "Steve".  The real one finally showed, and we got in.

The show was amazing to say the least.  It was the smallest venue anyone there had probably seen the band in.  It was almost a thank you show to the biggest fans.

We hung out near the sound/light booth and Andy filmed the whole thing using @boutcher's HD camcorder.  I did some qik.com streaming.  There's one below of when we were waiting for Mew to go on. 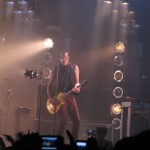 Speaking of Mew, they put on an awesome show.

Not much really more to say other than it was the best NIN show I've seen.  Not flashy as far as a stage show, but amazing in content.  Trent has been good to us.

Check out my photos of the weekend. 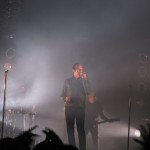